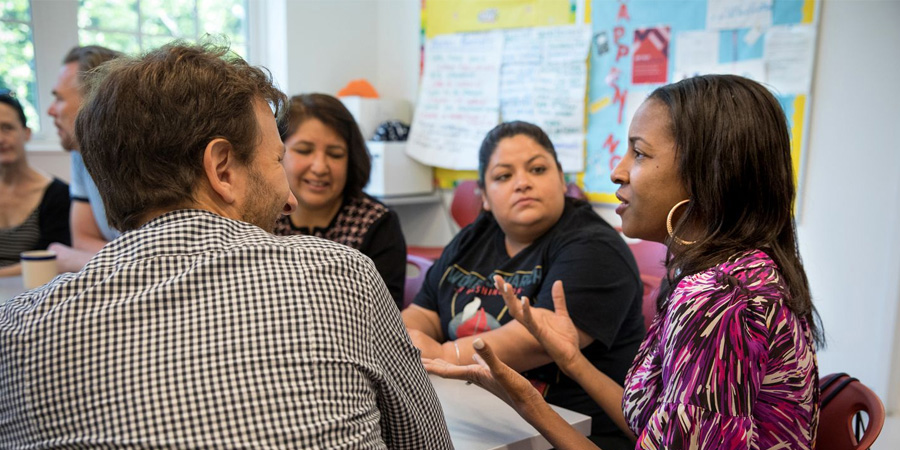 Mike Dixon left his first visit to his son’s new school deflated. The Dixons had scored a seat at a Chinese-language charter school in the District that families clamor to attend.

His children would be attending a diverse public school — a rarity in a city where most schools are segregated and the student population is overwhelmingly black.

But when Dixon attended a school open house in 2012, he was one of the few black parents in the room. And when he returned for an evening parent meeting, he was again one of the only black parents. He believed he didn’t belong, so he stopped attending.

As cities across the country gentrify — and schools in those cities slowly begin to diversify — communities are struggling to ensure that all parents have an equal voice. Parent organizations have emerged as a striking, and consequential, example of the cultural, economic and language divides among families.

For Dixon, it felt as if parents were vetting him at those first two meetings, determining whether he should be there.

“It was kind of like this is our space, and we need to ask some qualifying questions: Where do you live, where do you come from? And you can feel that,” said Dixon, a native Washingtonian. “It’s challenging as a black father because there is less power — at least perceived — in the school.”

Parents of color have long spoken of feeling alienated from parent organizations — many schools in low-income neighborhoods do not even have formal parent groups. And drastic fundraising disparities between parent groups at schools in wealthy neighborhoods and those in ­lower-income areas have been extensively researched.

Now, a small but growing number of researchers and organizations are focused on what happens within these parent organizations at schools in gentrifying neighborhoods.

Their findings: White and wealthy families often enter predominantly black and Hispanic schools, assume leadership roles and push for what’s best for their children — not always realizing that it may not be what’s best for the entire student body, according to Alexandra Freidus, an educational ethnographer at Seton Hall University.

They believe more students should attend neighborhood schools. But what happens when it’s their child?

Parents across all demographic groups care fervently about their children’s education, but, Freidus said, families have varying amounts of time and resources.

There are also tangible consequences to who holds these leadership positions. Freidus, whose research focuses on gentrifying New York schools, said she frequently observes parent-teacher organizations invest money in lower grades. Those are the grades that often see the biggest jump in affluent and white enrollment in historically low-income neighborhoods.

When affluent parents arrived at one D.C. school, they pushed for a costlier after-school program that alienated low-income families who couldn’t afford it, according to research by Esa Syeed, a former D.C. schoolteacher who is now a sociologist at California State University at Long Beach.

“The idea that you are a customer that can make demands at a public school is a very specific kind of idea,” Freidus said. “It’s about your level of trust in social services and public institutions and your history with those places that may influence whether you think it is a good idea to draw attention to yourself.”

“I always looked at the school as an authority figure instead of a service provider,” he said. “I realized that there was so much privilege that I haven’t experienced, that it’s not anyone’s fault, but that’s just the way it is.”

It didn’t take long for Laura Wilson Phelan, who served as Ward 1 representative on the D.C. State Board of Education until 2019, to notice something troubling.

Her ward covers a diverse and rapidly gentrifying swath of the city, but she fielded calls and emails mostly from white parents. Even if a school’s student body was less than 5 percent white, those parents often held most of the positions on the PTO.

When she heard from low-income families — overwhelmingly black and Hispanic in the District — they would often be calling about a personal issue or conflict affecting their child at school. Wealthier families called about the need for more resources on campus and urged systemic changes.

“That’s the luxury you can have when the system serves your child well,” Phelan said. “You can put your head up because it isn’t an emergency.”

So Phelan decided to challenge how adults perceive themselves — and other families — by creating a nonprofit in 2016 aimed at bringing together parents and grandparents from different backgrounds.

For three years, her organization, called Kindred, has gone to D.C. public schools to speak with families about race and their experiences on campus.

After eight sessions, parents meet with school faculty to discuss what they hope to see from teachers and staff. The next year, parents in the original group lead discussions with other parents.

“Generally speaking, white families can walk in a world in which their ideas will be immediately accepted,” Phelan said. “Running for PTO president seems like a very natural and accepted thing.”

Since Phelan established Kindred, the organization has expanded to more than a dozen charter and traditional public schools, with eight full-time employees and an annual budget of $1.3 million.

One of the campuses that contracted with Kindred was Washington Yu Ying Public Charter School, the Chinese immersion school Dixon’s children attend.

School leaders first asked Dixon’s wife, a hairdresser, to attend. But Dixon, an engineer who was out of a full-time job and working part time as an Uber driver, had a more flexible schedule. Five years after that initial open house at the school, Dixon grudgingly went to the first Kindred meeting.

And then he surprised himself — he went back. And back again.

And then he volunteered for parent leadership roles at the school.

“The white families that I met — and we talk about it — are just really unaware of the challenges that these black families have,” Dixon said. “And I feel like through this process, they have been able to be aware.”

Maquita Alexander, Yu Ying’s principal, said black parents never told her they felt uncomfortable at the school, but she always sensed it.

She now notices parents across socioeconomic groups talking in the hallways since the sessions with the facilitators. Families who had never carpooled are asking each other for rides.

“We have always been a ‘rip the Band Aid off and let’s fix it’ kind of school,” Alexander said. “Parents are much more comfortable about having conversations about race.”

While Dixon was looking for work, Kindred trained him to be a facilitator for the program. He works more than 20 hours each week leading parent groups across the District.

“Today, we are going to talk about racism,” Dixon said to a group of white, black and Hispanic parents at an elementary school in Northwest Washington in the spring, “when we have maybe fueled racism, and when someone has made us feel other than.”

The mother expressed what other black parents at her child’s elementary school on Capitol Hill were thinking.

“Some parents feel their voices aren’t heard,” she said in the drab lounge at the school in a gentrifying neighborhood.

The other black parents at the Kindred meeting nodded in agreement.

A white father, a PTO officer, responded that he hopes to include more diverse voices, but when he emails parents requesting help, it’s mostly the white parents who respond.

“The intent was there, for better or worse,” he said.

Kindred allowed The Washington Post to attend five, 90-minute meetings at three schools in recent months on the condition that parents not be named so they could speak freely.

A mother bluntly offered why black parents may not be responding to the PTO emails: “It’s different when you have a white person coming into a majority black school.”

The man agreed, aware of the dynamics of a school that had been entirely black for generations and has only recently experienced white students enrolling in the lower grades.

“I literally felt like a usurper my first year here,” he said.

Parents from different backgrounds conceded they did not have extended conversation in the hallways.

One black mother recalled that when she purchased a school shirt from white parents selling them on campus, no one really spoke to her — even as she spent the money she had scrounged from driving extra shifts for Uber.

The white father acknowledged that the mother was right. Parents were spending their hard-earned money on school spirit items, and he should have used it as an opportunity to get to know the other parents.

The conversations sounded similar at the Northwest Washington school where Dixon was a Kindred facilitator. The school has mostly black and Hispanic students, but there’s a growing number of white children.

One white father of a preschool-aged child said he hated attending schoolwide meetings because the staff spoke to parents as if they were stupid. He said he imagined administrators did not treat parents that way west of Rock Creek Park, referring to the wealthiest corner of the District.

“They don’t talk to parents like that at all schools?” a black parent asked. “I thought that was everywhere.”

No, the white parent said.

“I’ll keep my third eye open on that,” the black father said.

A black grandmother said she felt as though her grandson’s teacher was afraid of her, that the educator didn’t know how to approach her.

“I’m very outspoken,” the grandmother said. “I don’t think she gives him the proper attention.”

A young Hispanic mother who spoke little English said, with the help of an interpreter hired by Kindred, that her young son was not receiving the services required by his special-education plan. When she asked about it, she was told her son no longer needed that service — even though she believed he did.

The parents in the group were shocked and offered to help her demand those services.

There were some uncomfortable laughs, too, as parents confronted their biases.

“Do you ever see someone walk down the street and clutch your purse?” a black parent asked.

“I don’t want your purse,” a black father joked. They had just learned they lived blocks apart.

Throughout it all, Dixon was there, sharing his experiences as a black father in the District, understanding how easily some voices can be muffled.

Then, keeping with their weekly tradition, the parents rearranged the classroom desks, took out their cellphones and shared pictures of their children with each other.

A Parent-Driven Movement For Equity In Education